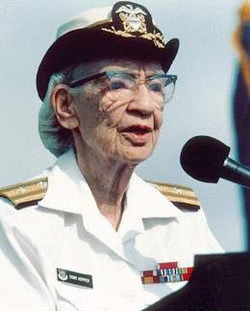 "Admiral Hopper, a senior consultant at Digital Equipment Corporation, is the first woman to receive America's highest technology award as an individual. The award recognizes her as a computer pioneer, who spent a half century helping keep America on the leading edge of high technology."
http://www.cs.yale.edu

Grace Hopper earned her PhD in math at Yale in 1934. After marrying her husband, Vincent Hopper, she became a math professor. By 1940, she was bored. She left to study with a noted mathematician at the New York University and was still studying when the Japanese attacked Pearl Harbor. In the next 18 months, she quit her job as a professor, divorced her husband, and joined the U.S. Navy at the age of 36.

At this point, she was ordered to report to Harvard and work on the Mark I, a large automatic digital computer that provided vital calculations for the Navy during World War I. She became the third person to program the Mark I. She worked on the Mark I, Mark II, and Mark III and received the Naval Ordnance Development Award for her pioneering applications programming success.

In addition to being highly intelligent and innovative, Hopper also had a wonderful sense of humor (Click to see Grace Hopper on Letterman). She and her crew helped popularize the term “debugging.” They were working with the Mark II, when it suddenly stopped functioning. When the crew looked for the problem, they found a moth that had gotten smashed in the machine.
In 1949, Hopper risked her career. She joined the Eckert-Mauchly Computer Corporation to provide businesses with computers. Here, she began to work on UNIVAC I, the first large-scale electronic digital computer. Also around this time, Admiral Hopper extended an improvement on binary code by developing the A-O compiler, her first compiler.  This series of compilers translated mathematical code to machine code, among other things.

Admiral Hopper was instrumental in not only these endeavors, but many others as well. She opened up the field of computer science to women.

Other Women in Computer Science